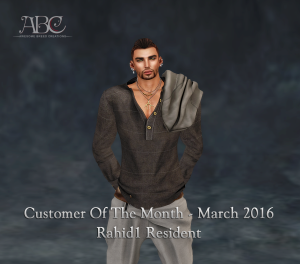 Congratulations Rahid1 Resident for being chosen as the ABC – Awesome Breed Creations March Customer of the Month.

Rahid1 is very humble about being choses as Customer of the Month. When asked how he felt about being chosen he said he did not know why he was chosen but it was nice to be recognized for such and honor in the ABC Community.

Quote: Rahid is many things.  A wonderful friend, a great teacher, a talented breeder and an inventive creator.  He has a special talent when it comes to understanding how to get from here to there in the horse breeding world, and he nearly always beats me in the race to get whatever it is we are trying for.  I say “nearly” because I think I beat him maybe ONE time out of 947. ~ Missy222 Resident 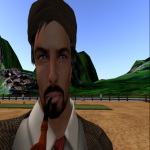 Quote: One of my favorite memories of Rahid1 and Mani (his  soulmate) invited me to the museum for an interview, it was like coming home after a long journey… like coming home to family. ~ Francesco Smadga

Rahid1 has explored many things in Second Life from role-play to having his own SL Shop and learning to build mesh. He is very artistic, creative and paints when time permits. All during his time in SL he has been learning English. Rahid1 has been breeding ABC Horses from the start of ABC.

Quote: The first horse he met was a Piebald name Dots for role play. But then became attached very quickly and everyone knows how fast you can become attached to these amazing horses. ~ Rahid1 Resident 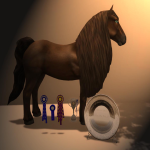 After the death of Maniranjal, someone dear to him, he was not around as much. The love of the ABC horses drew him back and the ABC Community and Staff have helped with the healing process. Mani was an inspiration to him. Before she passed she gifted Mani with her Avi and the Museum for an amazing collection of ABC Horses. Christmas 2015, with the passing of Mani the museum closed, as it was too expensive for Rahid1 to continue. He turned this passion towards the ABC Classic All-Breed Horse Show and won the first Championship.

Quote: Rahid1’s sincere dedication to keeping the museum open for his friend while she was sick.  A rare quality in people these days. ~ Mosaii Resident 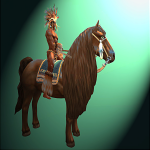 Breeding is another part of ABC that Rahid1 focuses on. His favorites are Friesians, Gypsy Vanners, Warpaints, and now ponies.

Quote: Very organized highly dedicated breeder that is willing to help new breeders learn about the hobby.  Willing to explain to people about coats and breeding and keeping the secondary market open. ~ Mosaii Resident

Everyone interviewed had high praises of Rahid1’s dedication, caring, loyalty and being true friend. His unending devotion to the Royal Manjali Horse Museum and Mani was prevalent in the praises we received. It would be remiss to not acknowledge this unwavering passion to keep a dear one’s legacy alive, even with the hardships surrounding it. It takes a very special person to keep the memory of someone else’s dream and devotion. 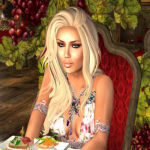 Quote: Rahid has so many facets it is difficult to describe the whole person- the main thing is- underneath the sometimes slightly abrupt surface you find a huge heart of gold- loving, nourishing, caring and protecting. He has a great eye for beauty-which shows in his breedings and in his builds- or everything he touches. ~ Ayla Guisse

Congratulations Rahid1 you are a bright light among the ABC Community