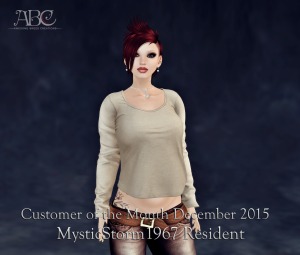 One of the great things about ABC – Awesome Breed Creations is that we have the best Community Members. We are recognizing an exemplary person for our Customer of the Month for December 2015 MysticStorm1967 Resident.

MysticStorm was chosen as the ABC Customer of the Month for her positive and helpful personality in the ABC Community. Her enthusiasm and encouragement in group and around the grid has made her shine among her peers.

Quote: I am very pleased that she was chosen to receive this award. I cannot think of anyone who is more deserving! She loves her horses and works so hard on them. ~Mahni Tearful

MysticStorm was really honored, not just by the nomination but also for being chosen as one of ABC’s Customer of the Month.

Quote: I was surprised and very happy to be chosen, and it feels great to know ABC does see and appreciate it’s consumer family! ~MysticStorm

MysticStorm has been involved in breedables for sometime and started with ABC – Awesome Breed Creations in 2015. Her specialty is the Drums but has found a new love for the Gypsy Vanners. Chaser Equine Ranch, which she owns, is home to these amazing Drums and Gypsy Vanners.

The most important thing for MysticStorm is her SL family which she shares the love of her ABC Breedables. Some of her favorite things in SL have been games and hanging out with the breedable community, but her main focus is on the Horse Shows. The breeding for vanity traits, preparing the theme, and costumes are the highlight of the experience with ABC Breedables.

Quote: One of my favorite interactions with MysticStorm was when I told her about the Horse Shows, she was so excited and so enthusiastic on doing this part of ABC. ~Frank Smadga

Quote: One evening we started to chat and I was telling her about some of my fun experiences in the ABC racing and pretty soon we were talking about our RL families and sharing experiences,  the start of a friendship… ~Petra Paris

We spoke to several of the community about MysticStorm and we found that everyone said similar things about her character when speaking about her… kind, patience, caring, honest, great listener, and over all a big heart.

Quote: She was there for me at a time when i was really low…and she made me smile. ~Isabell Nyn (Cristole)

MysticStorm is another fine example of the ABC Community. The ABC Community is fantastic and it has been fun to see them step up and go above and beyond with their interactions with the community, staff, and participate in the many ABC Events and Programs.

Congratulations MysticStorm on being chosen as the ABC Customer of the Month!