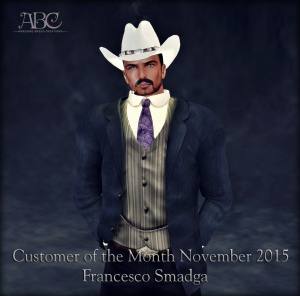 ABC – Awesome Breed Creations‘ first Customer of the Month, Fancesco Smadga (aka Frank), is more than an inspiration but is genuine in all that he does. We thought it would be great to get to know him better. He is much more than a great host in the ABC Main Group Chat with coffee and breakfast, but he is also very gracious and humble.

Quote: Frank has got to be one of the most genuine helpful members of the ABC family and has been instrumental in aiding my efforts to become a leading silk maker in ABC. Frank, even when he deserves it, refuses to take anything in return for his generosity. ~ Sadoc “Doc” Rajal

This is no surprise to some but if you don’t know Frank you should definitely reach out to him and say hello. You will be greeted and invited into his circle of friends and be treated like family.

Quote: I’ve only known Frank for about a month. He is always friendly in chat and very entertaining. ~ Ja Baxton

Frank has been breeding ABC Horses for approximately 3 years. When the ponies were released he jumped in and started breeding them as well. He lives on a homestead with his family, where his private stable is named S-D and has been cultivating his herd to get the best lineage possible. Anyone that knows Frank knows he has a deep affection for his line of Arabians (he chuckles when he is asked about it). He does dabble in other breeds and is currently working on project with the amazing Bashkir Horses.

Quote: Frank was the “Father of the Bride” for my wedding ~Hagit42 resident

The horse and pony shows are another avenue that Frank utilizes to show his amazing breeding skills. It takes dedication and breeding knowledge, along with many combinations to breed a show horse or pony. He is very thankful to the organizers of the shows, as they are dedicated to providing a venue for breeders to showcase the ABC – Awesome Breed Creations horses and ponies.

When Frank is not breeding and devising his next breeding move, he is exploring SL with his family either sailing or fishing. Frank is very proud of his daughters and enjoys the time spent with them.

We asked him what his favorite thing about ABC is, of course other than his amazing Arabians, he said the highlight of his day is the daily engagement in the ABC Main Chat Group, serving up daily goodies and sharing his love of ABC horses and ponies with his family and Friends.

Quote: I personally think you couldn’t have chosen a better recipient for this award many people in the ABC family owe him a great debt of gratitude weather for his morning chat amusements or actual help through the sharing of his herd or by sharing his vast bank of knowledge and encouragement. ~Sadoc “Doc” Rajal

Frank is a pillar of the ABC Community and a fantastic representation of the first ABC Customer of the Month. Everyone we spoke to could not say enough about his kindness, eagerness to help, and being the first to comment or say way to go on new foals! Not to mention sharing his knowledge with anyone that needs assistance.

Congratulations Frank on being our first ABC Customer of the Month!