The ABC – Awesome Breed Creations 2016 Crown Cup is known for the entertaining and amazing week of festivities before the Official Race! The 2016 Summer Crown Cup will be no different. ABC has a great week planned!

We invite you to join in on the fun! 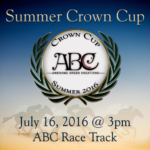 BINGO on the Race Track! Join us at 12pm SLT (noon) and 7pm SLT for a fun evening of BINGO! We’ll gather in the infield of the track for a good ol’ time playing BINGO!! We will have great prizes to give away too! Join us!

Summer Mule Sprint — Come in your favorite summer attire (yes you must be dressed; Naked does not count as attire!) for Mule Sprint Races! We’ll run a heat for every 5 mules entered. The winner of each heat will run a final race to determine the winner! Time and presentation count! Half the winning score will be for time and half will be for “presentation.” Jockeys are to provide their own mules.

Mule Relay Team — Gather yourself and two other teammates for a team of three(3). We’ll run this race as a Flat Race. Each time a jockey comes to the finish line, the jockey will set the mule for sale so the next jockey will buy it for L$0, mount and complete the next lap until the last rider finishes the race. Each team is strongly encouraged to enlist a member of the Racing Authority as a part of their team. Team will be supplied a mule. Teams are to develop a costume for their team in keeping with the theme of the event: Summer beach attire. Winners will be determined by time and presentation (50/50).

Mule Demolition Derby — That’s right race faces it’s time for a demolition derby on the ABC Track! No teams allowed! Each entrant must be wearing attire fitting the theme. Using the track configuration for a Steeplechase, each jockey will start at Gate A and while completing the race (cross the finish line twice), jockeys are encouraged to use every dirty, sneaky, underhanded trick they can think of to win the race. Last jockey standing, so to speak, will be declared the winner by the judging panel.

Elysium Concert Join us on Wednesday, July 13th at 7pm SLT on the ABC Track infield. Elysium is a cabaret-style dance company with breath-taking and amazing performances. You’ll be able to watch on both the track sim and from the grandstands (just cam over to the stage; we’ll put the stream on both sims). You won’t want to miss what has become a much anticipated part of the Summer Crown Cup program of events

Join us at the grandstand for an evening of racing on Thursday and Friday. These are our normal races as previously scheduled for these days. Come enjoy the racing and camaraderie in the stands as our Large Flat racers work to qualify for the 2016 Fall Crown Cup coming in October.

You won’t want to be late for this race! This Crown Cup will be the first Crown Cup Racing Event to include a Pony Crown Cup Race as well as a Horse Crown Cup Race! With both the Pony Cart and Thoroughbred races to run, we’ll start right on time. After the races, the jockeys and owners will join ABC for the official photographs, while everyone else is invited to our 2016 Summer Crown Cup Beach Party!

Immediately following the running of the Summer Crown Cup Event races, you are cordially invited to a beach party! Put on your flip-flops, swim suits, bikinis, sun dresses, big floppy sun hats, and sunblock for this fun frolic on our specially built ABC Beach!

Join us on Monday for a long standing tradition, the post-Crown Cup JOCKEY ROAST! Come join the fun as our jockeys are ribbed, rubbed, and barbequed! There will be great laughs and great give-aways! We’ll start at 3:30pm SLT at the Jockey Club. It’s always a great time; You won’t want to miss it!