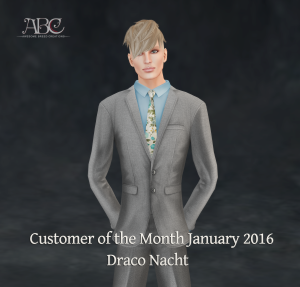 ABC January Customer of the Month is Draco Nacht. Not only is Draco a supporter of the ABC Community but he is also a veteran of the ABC Racing Program. He is always ready to guide a new ABC’er or jockey on their journey. Draco was very humble when he found out that he had been chosen.

Quote: I was so excited and flattered. I blushed a lot in real life which is a strange thing to do in front of a computer screen. ~ Draco Nacht 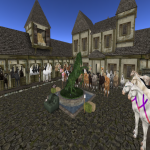 Draco has been on SL almost 8 years and owns a Nachts Landing with his partner Theo. Theo and Draco joined together and helped one another through orientation. Draco never really played video games much and was slow to adapt. They have done many things in SL, such as DJ’ing, clothes creators, then we moved on to breeding cats. One day Draco was wandering around a multibreedables sim and saw the ABC horses and knew Theo would love them (he had horses when he was younger). He didn’t know much about horses, but he was impressed with the sculpts and attention to detail for the different horse breeds.

When asked about his favorite breed…

Quote: Oh man, this is asking my favorite children! I’m going to cheat (sorry.) My first horse was a Blue Roan Clydesdale named Spooky Mulder, though I’ve moved on to breed Belgians and Shires. 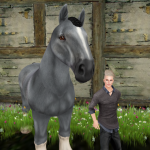 Belgians are probably my favorite at the moment, but I really love my Mustangs, too. And Paints. I’m getting back into paints. And the Dutch Warmbloods–they have amazing coats, as do the Rocky Mountain Horses. Oh, and my Appies! Little spotty horses. I have a problem. Ponies I’m still really stuck on the Shetlands. I was NOT going to breed ponies. Nope. Not me. Not at all. Not ever. Except… well… maybe I’d pet out a Shetland. That was the idea when I acquired him. Then I put his little cart on and it was so cute, I thought maybe I’d just breed a couple of more. Then I found myself late at night shopping for better stats, hitting auctions. And, yes. Many ponies now. The Highlands are the prettiest to me right now. ~ Draco Nacht 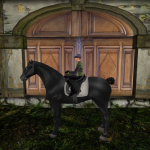 Draco really has a passion for all things racing. It takes up most of his weekend and he wouldn’t have it any other way. He loves the challenge of breeding the best combination of stats, mane, and tail for racing, then watch them run on the track against the best of the field and have a great time. 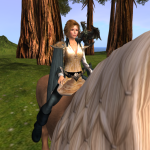 Quote: He is a gentleman and a great jockey. ~ Amethyst Paule 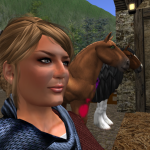 Quote: We’ve done some horse-trading in the past, and often sit in the starting gates at the races at the same time. I find him very sympatico, helpful, and generous. And what a sense of humour – he makes me laugh. He has some great horses. ~ Bree Birke

Draco also dabbles in the horse shows with attention to the details of every aspect of the event. He has been asked to judge the events as he is seen as an expert in horse breeds and vanity traits. 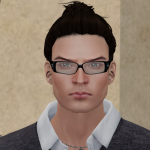 Quote: It’s not limited to racing, though. Draco’s been actively involved in the show community as well. He judged one of the All-Breed Pony Shows and managed to somehow make the whole thing ten times cuter with his commentary. He agonized over the choices he made, loving every pony, every costume, and endeavoring above all to be fair. Some guys front like they’re too macho to fall in love with ponies, but D’s confident enough in who he is to croon over a little pink pony in public. He’s the best. ~ Theodore Nacht

Susannah has known Draco for about 5 years and she has only known him to be caring and having a great sense of humor. He is one of her favorite people in the world. She goes on to say that Draco represents the ABC brand well. Susannah has so many favorite memories of Draco, but the day he gave her an Island Sun Pony was very special. He knew I wanted one and that rainbow is my favorite color.

Quote: He’s SO enthusiastic about ABC horses. i know he loves them a great deal, and loves racing them. ~ Susannah Resident 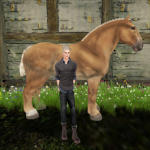 Draco is a rarity not only in the ABC Community but also in the ABC Racing Program, ABC third party markets and events. He has contributed a great deal to the spirit, energy, and comedic relief.

Quote: No one deserves to be customer of the month more than Draco. He’s a huge proponent of racing and ABC in general, a long-time breeder, shower, judge, jockey, some-time auctioneer, host, and court jester. ~Theodore Nacht

Make sure to give Draco a shout out! He is very generous with his wit, knowledge, and infectious fun side.