Once again for the holidays ABC is providing our community an AWESOME way to help support Toys for Tots. 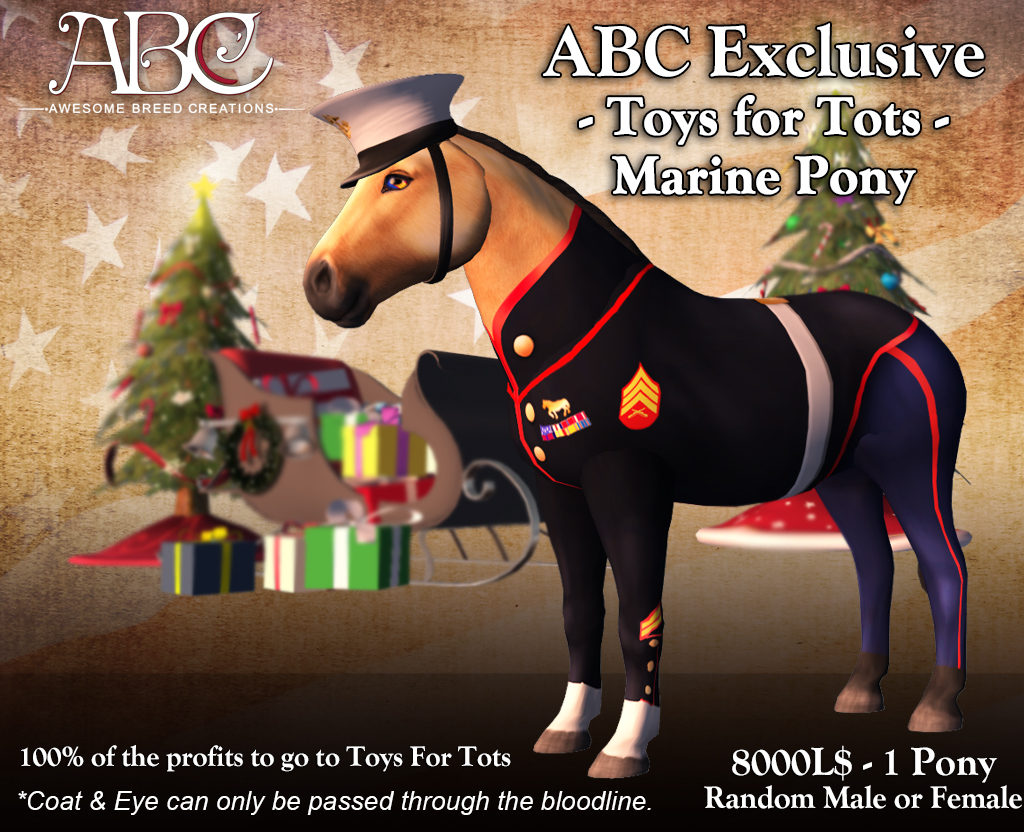 Purchase Price: 8000L$
Details: A limited edition Bosnian breed. The Coat and Eye can only be passed through the bloodline (M/F is random).

The ABC community has always done an amazing job supporting worthy causes and we know this event will be no exception.

Toys for Tots is a fantastic organization and focuses on giving toys to children in need and deliver a message of hope. For more information on the organization, visit their website http://www.toysfortots.org

Thank you for supporting this ABC Philanthropic endeavor…

Country of Origin:
Bosnia and Herzegovina
The Bosnian Pony is a member of the group of horses known as the Balkan breeds, and is thought to be descended from a cross between the Tarpan and the Asian Wild Horse.

History:
The Bosnian Pony bears many similarities to both the Hucul and the Konik breeds of pony, and the triad is generally known collectively as the Balkan breeds. The breeds are all considered ancient, and the Bosnian Pony is thought to have developed through a cross between the Tarpan and the Asian Wild Horse, also known as the Przewalski Horse. It is thought that there were infusions of oriental stock by the Turks during the Ottoman Empire, after which more Tarpan blood was added to make the modern Bosnian Pony breed.

Beginning in the 1900s, the Bosnian Pony has been selectively bred through government-controlled breeding programs. The principle breeding center for many years was the Borike Stud in Bosnia. The state controlled all breeding stallions, while mares were privately owned. During the 1940s three stallions, Agan, Barat, and Misco, were used to improve the breed. Agan and Barat resembled the Asian Wild Horse type, while Misco was a lighter type.

Until the Bosnian War, there were strict standards, including performance tests, for stallions in order to assure the quality of the breed. This strict control resulted in a pony that was functional and had a variety of uses.

Physical Description:
The Bosnian Pony generally stands 12.1 to 14 hands high, and may be bay, brown, black, gray, chestnut or palomino in color. They have a heavy head with a straight profile, a short, muscular neck, fairly flat withers, long, sloping shoulders, and a deep chest. The back is straight and the quarters sloping. The legs are well-muscled, although short, with clean, broad joints and strong tendons. They are sure footed. The breed bears a strong resemblance to the Asian Wild Horse, although more refined due to the influence of oriental blood. They are hardy and tough, and generally docile and good natured in temperament, making them easy to handle and ride. They are easy keepers.

Uses:
The Bosnian Pony is used for light farm and draft work, packing, and riding. They are frequently used as pack animals in rough terrain unsuited for motorized vehicles.