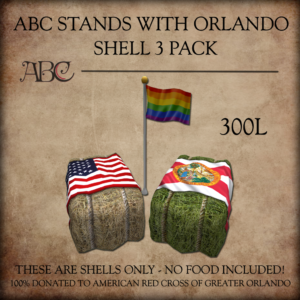 After the tragic attacks in Central Florida, the world awakes to news and rallies with resolve around the victims, family and community…

ABC – Awesome Breed Creations has created a few ways to stand with Orlando and support them.

300L$ per pack of three shells

… all L$ will go to the American Red Cross of Greater Orlando. ABC will be making a donation on behalf of the ABC Community.

Each pack includes 1 hay, alfalfa, & salt for 300L$, Please remember these are for SHELLS ONLY. You must already have the food/salt in your account for the shells to activate.

The boxes are no copy, no mod, no transfer!!

If you would rather make a donation, there will be a donation kiosk available in the ABC Main Shop and ABC Landing Point.