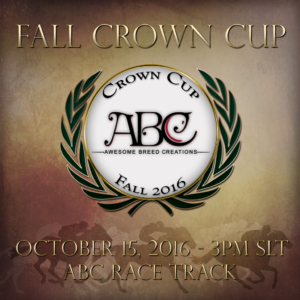 The Fall Crown Cup is coming. The qualifying horses have been selected. Now the fun begins. As always ABC likes to celebrate the efforts of the owners, jockey’s, and trainers. It is a fantastic way of bringing everyone together for some frivolity before the big event.

Monday, Oct 10, 2016 – 4pm SLT
Greedy time, but this is not just your normal Greedy! It’s HOT TUB Greedy so grab your swimsuits for a relaxing game.
ABC Racetrack

Wednesday, October 12, 2016 – 6pm SLT
Concert – In This Moment – Come dance the night away… you can also watch from the ABC Grandstands.
ABC Racetrack

Crown Cup After Party
A Night at the Library… Dress as your favorite fictional character!
DJ Wingtips will be spinning the tunes.
(Location and LM will be sent after the race has been made official)

Monday, October 17, 2016 2pm SLT
ABC Jockey Roast – Everyone is welcome!
(Location and LM to be sent closer to the event)

Join Us for a week of some fantastic events and the running of the ABC 2016 Fall Crown cup!