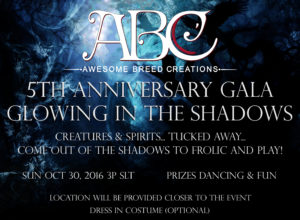 ABC – Awesome Breed Creations is celebrating 5 years. Co-Owners Stephanie Merrienboer and Darcul Bellic, set out with a dream of offering a product that would change breedables. By providing believability, activities, community, stellar customer service, and a vision for years to come, they have achieved that dream.

At this landmark in time, not only have the goals been met but have gone beyond expectations. ABC is looking forward to many more years of growth and let’s face it… FUN!

ABC not only has an amazing community but the ABC Team is the best in SL, they have been a vital part of ABC and it’s success.

To celebrate this auspicious occasion, ABC will be having an Anniversary Cabaret Show to start the celebrating and then the Annual Anniversary Gala. In recognition of 5 successful years, ABC will unveil the 2016 Anniversary Horse at that gala.

Elysium Cabaret
Wed, Oct 26
4p SLT
ABC Racetrack
*Note: You can watch from the event venue or from the grandstands*

ABC 2016 5th Anniversary Gala
Glowing in the Shadows
Creatures & Spirits… Tucked Away… Come out of the Shadows to frolic & play!
*dress in costume (optional)*

As soon as the gala is over the horse will be on sale in the ABC Main Shop (there will be an announcement when the vendors are going to be picked up).

RAFFLE: We also have a raffle for the ABC 5th Anniversary Horse. The board(s) will be located in the ABC Main Shop (details will be announced after the gala).